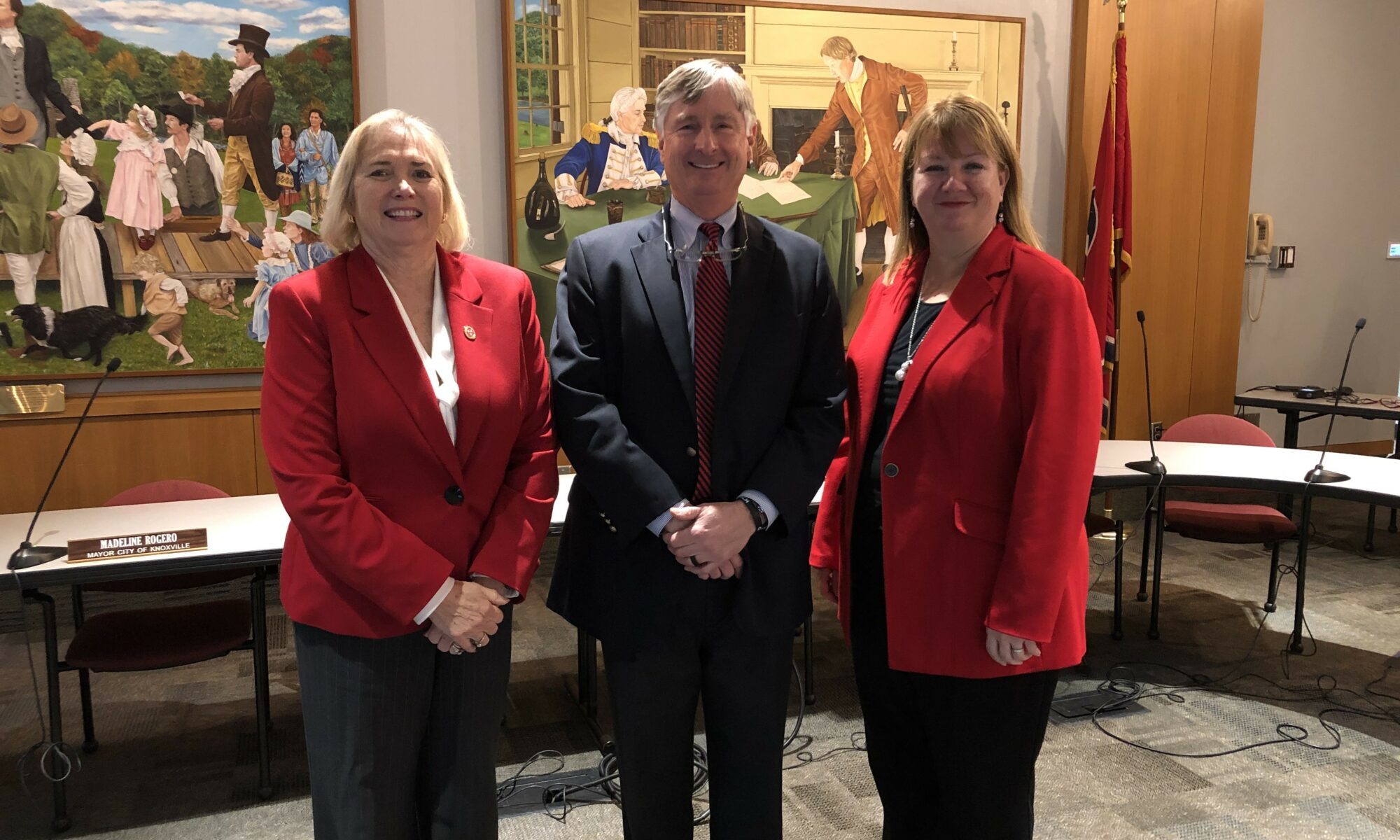 The TPO will close December 23 at noon and will remain closed through December 25. We will reopen at 8 a.m. on Thursday, December 26.

Knoxville-Knox County Planning recently completed a parking space count for the City of Knoxville. The project started with work compiled by an undergraduate GIS class at the University of Tennessee and completed by an intern and other staff.

The data was then analyzed, looking at parking spaces throughout the city for customers, employees, residents (multi-dwelling units with parking lots, not single-family homes), and students. The parking count did not include truck loading and unloading, temporary trucks lots, car sales lots, or abandoned or overgrown lots. Those spaces were, however, counted as “quasi-parking.” 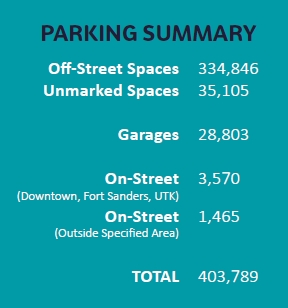 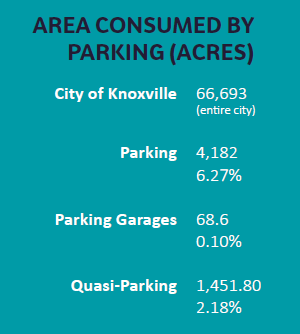 In our analysis, we looked at how much space (percent) parking took up in each land use. The ranking was:

Then, for each land use, we took out the amount of land consumed by parking and counted parking as its own land use (even though it isn’t traditionally) to see how it compared. In this exercise, we ranked the different land uses by area in acres and came up with the following:

This analysis shows us that roughly a quarter of our city is consumed by pavement, with 17% dedicated to roads and 8% to parking.

We put this information together and took it to Knoxville’s Park(ing) Day event, which took place on Gay Street on September 20. The event is recognized around the world by groups and individuals who claim a parking space for the day and dedicate it to human use instead of a parked car. Many people create small park spaces, drawing attention to the incredible amount of space our cities have dedicated to cars and how that space could be repurposed for people to use. 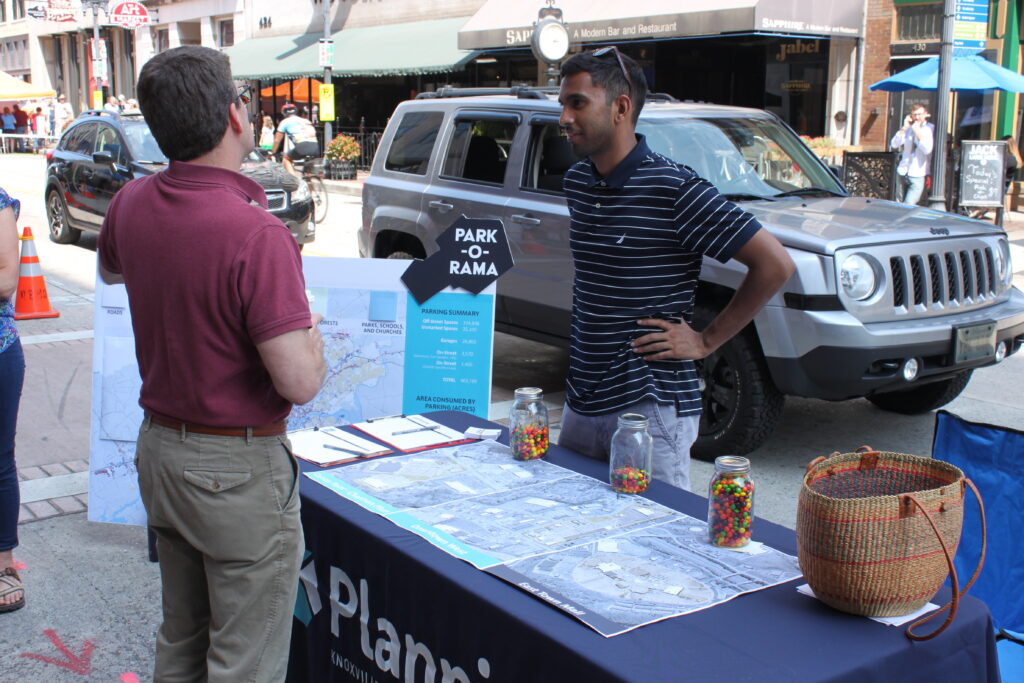 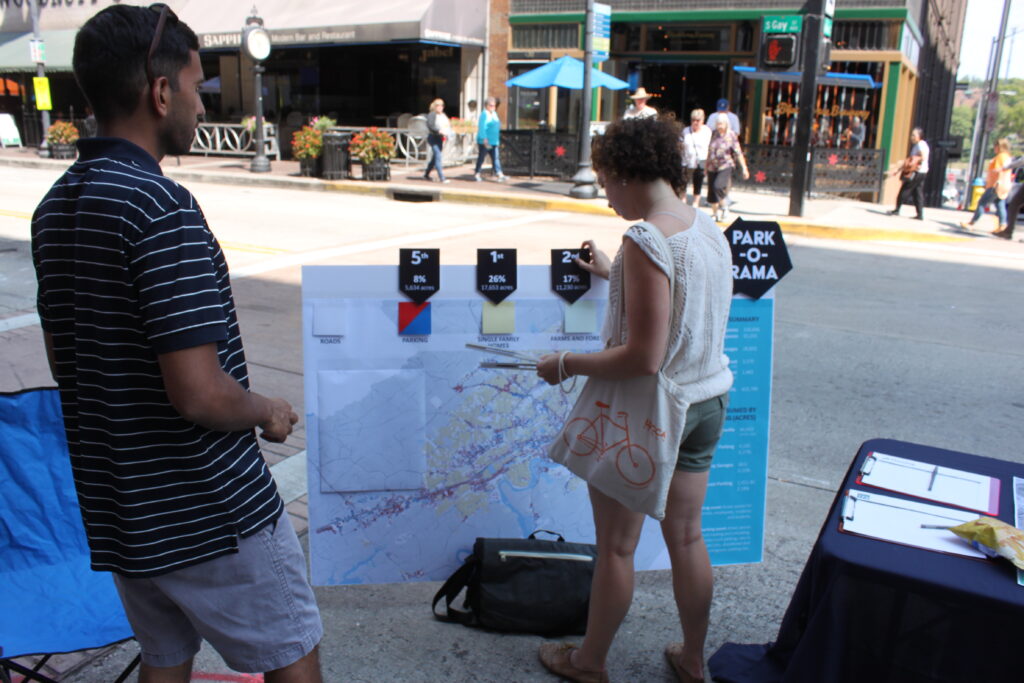 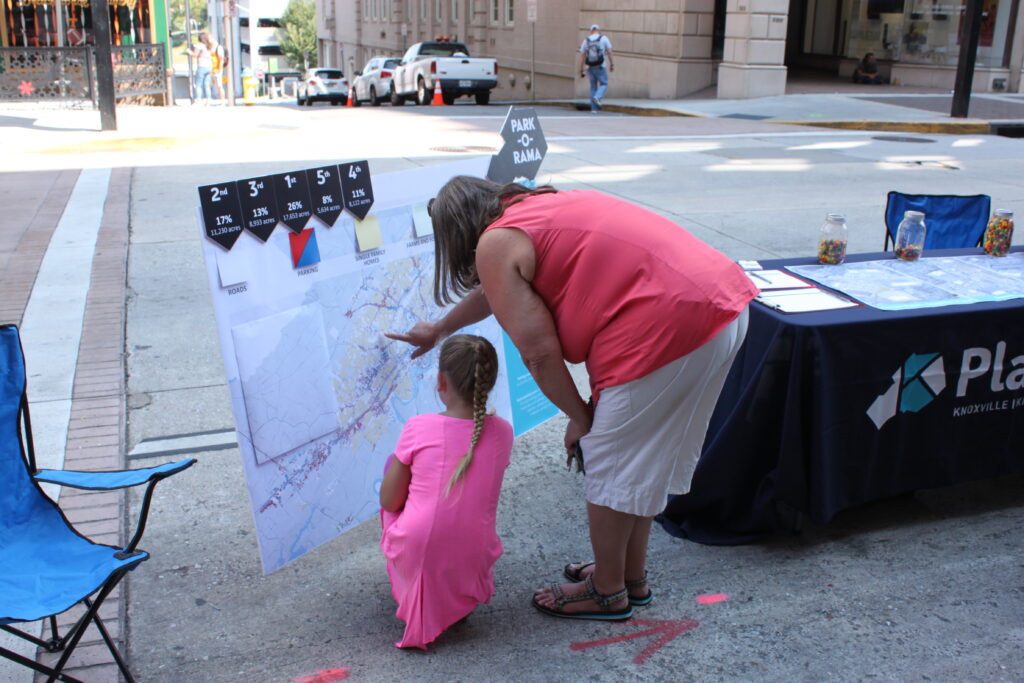 At the event, we had an activity set up where we asked participants to guess the percentage of land consumed by different uses in the city. Most people were surprised by how much land was dedicated to cars, especially when compared to other uses. We also asked people to guess how many parking spaces there were at East Town Mall, Downtown West, and Carson Point on Chapman Highway. They were again surprised by just how much parking is located at these locations.

Finally, we had information set up to get people thinking about possible redevelopment opportunities for all those parking lots. We often hear that development opportunities within the city limits are limited because almost all the land has already been developed. But with the amount of space taken up by parking (and much of it underutilized) and the increased flexibility allowed within the city’s updated zoning ordinance, which is set to go into effect January 1, 2020, there are opportunities to make use of those spaces. An example of that is the announcement of Stockyard Lofts, a mixed-use development proposed for what is currently a parking lot in the Old City.

Planning’s interest in this was sparked by the CityLab article, “Parking has Eaten American Cities,” which compares the amount of land consumed by automobile parking in five other U.S. cities and considers the implications of that use. So, has parking eaten Knoxville? Our analysis shows that eight percent of our city is taken up by parking. That may not sound like a lot, until you consider how much of that space is underused or unused. Taking that in account allows us to start thinking about how we can reuse and repurpose some of those spaces, whether it’s by creating a small park or a mixed-use development with 152 apartments and 5,000 square feet of retail space. 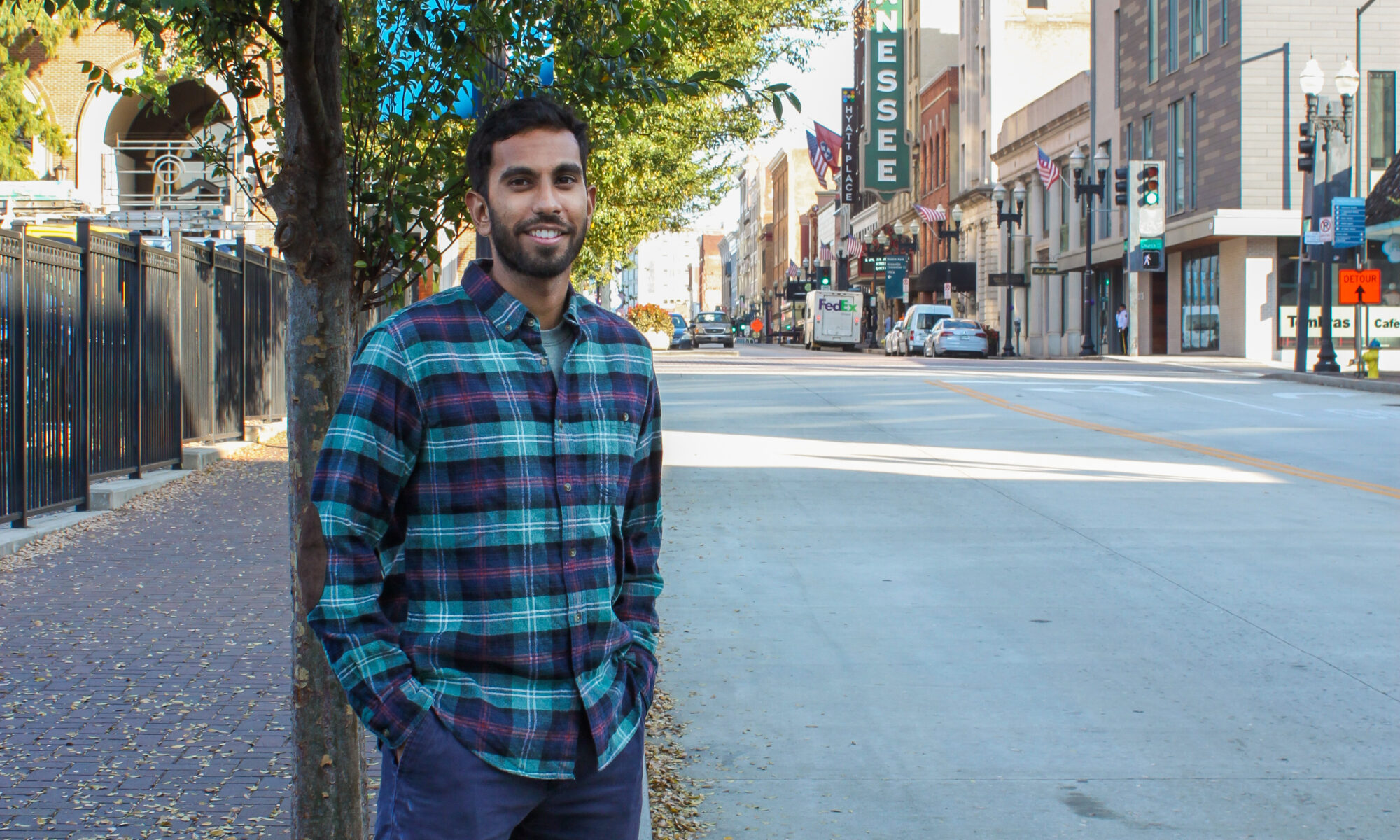 Sharath Rereddy recently joined the TPO for a year-long position serving with AmeriCorps. Before moving to Knoxville, Sharath grew up and lived the majority of his life in Fairfax County and neighboring Arlington, VA. He spent four years a little further south while attending Virginia Tech, where he majored in economics. After graduating with his bachelor’s degree, he moved back to the DC Metro area and worked in finance as an internal analyst for Accenture. While living and working in Arlington, his interest in planning and sustainability deepened, and he decided to return to school to pursue another degree. Since then he has earned a graduate certificate in sustainable planning from George Washington University, and is excited to gain experience and insight into planning practices before returning to complete a graduate degree.

In the coming year, Sharath will manage bicycle and pedestrian counts and present information to area high school drivers education classes and other interested groups. He is also helping with an annual Title VI data collection and mapping update, and has other projects on his horizon. He hopes to collaborate with Ijams Nature Center to organize a bike safety talk and group ride that ends at a special exhibit at the park.

When he’s not at work, you can find Sharath relaxing or reading at his home in North Knoxville. He also enjoys spending time outdoors while hiking, biking, and playing soccer. Sharath is looking forward to exploring nearby destinations for his favorite outdoor activities as he continues to enjoy the Knoxville and surrounding area.

Let us know what you think about the draft FY 2020-2023 Transportation Improvement Program (TIP)! The TIP is a short-range plan which includes all of the transportation projects that will be funded, designed, and built over the next four years. The TIP implements the transportation system vision established with the long-range Mobility Plan 2040.

Where can I find the draft TIP?:

How can I give feedback on the Draft TIP?: 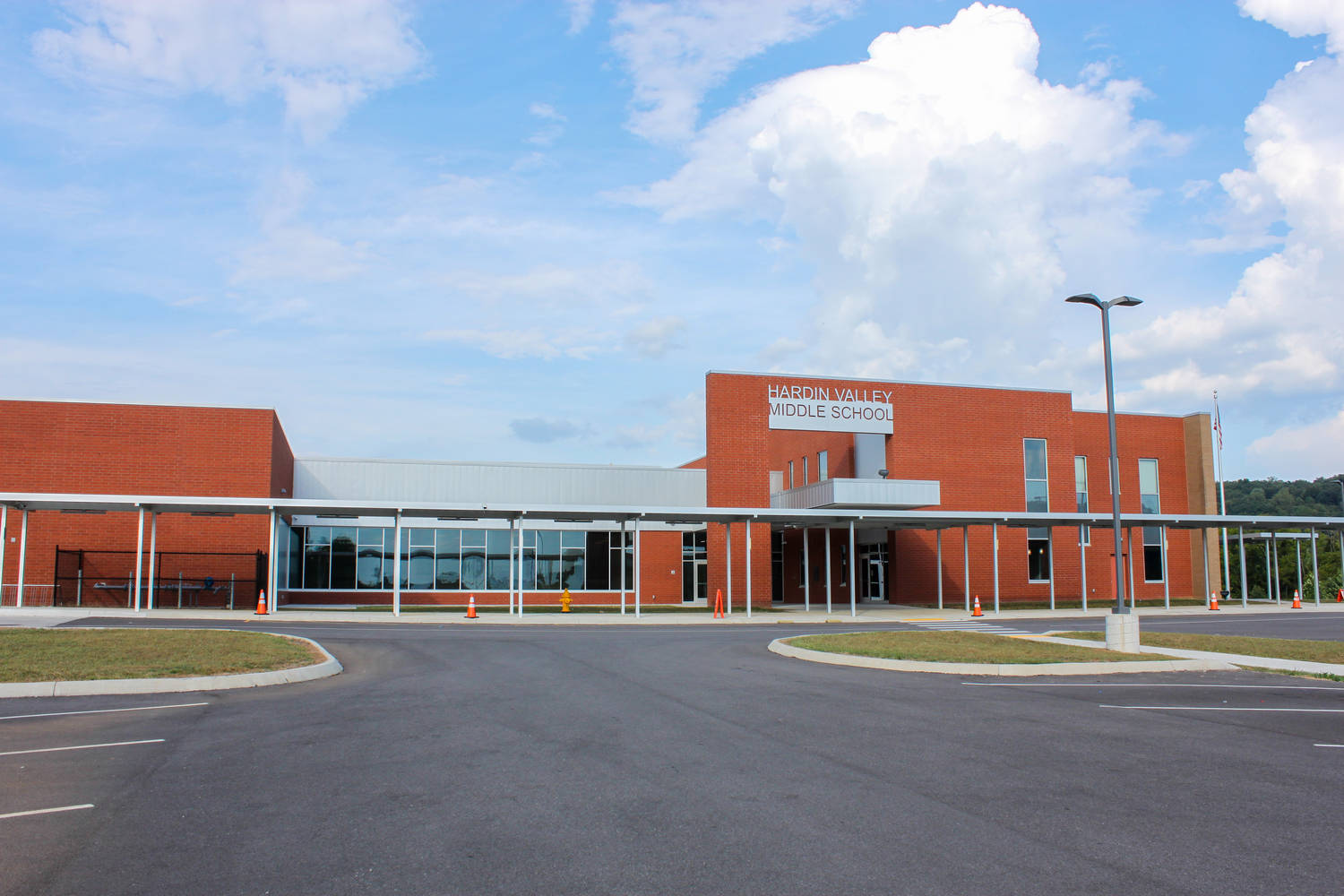 This study examined existing transportation conditions and future needs in the Hardin Valley area. It prioritized improvements with the goals of maintaining mobility and addressing safety for people using different types of transportation. The final report is now available on the project page. 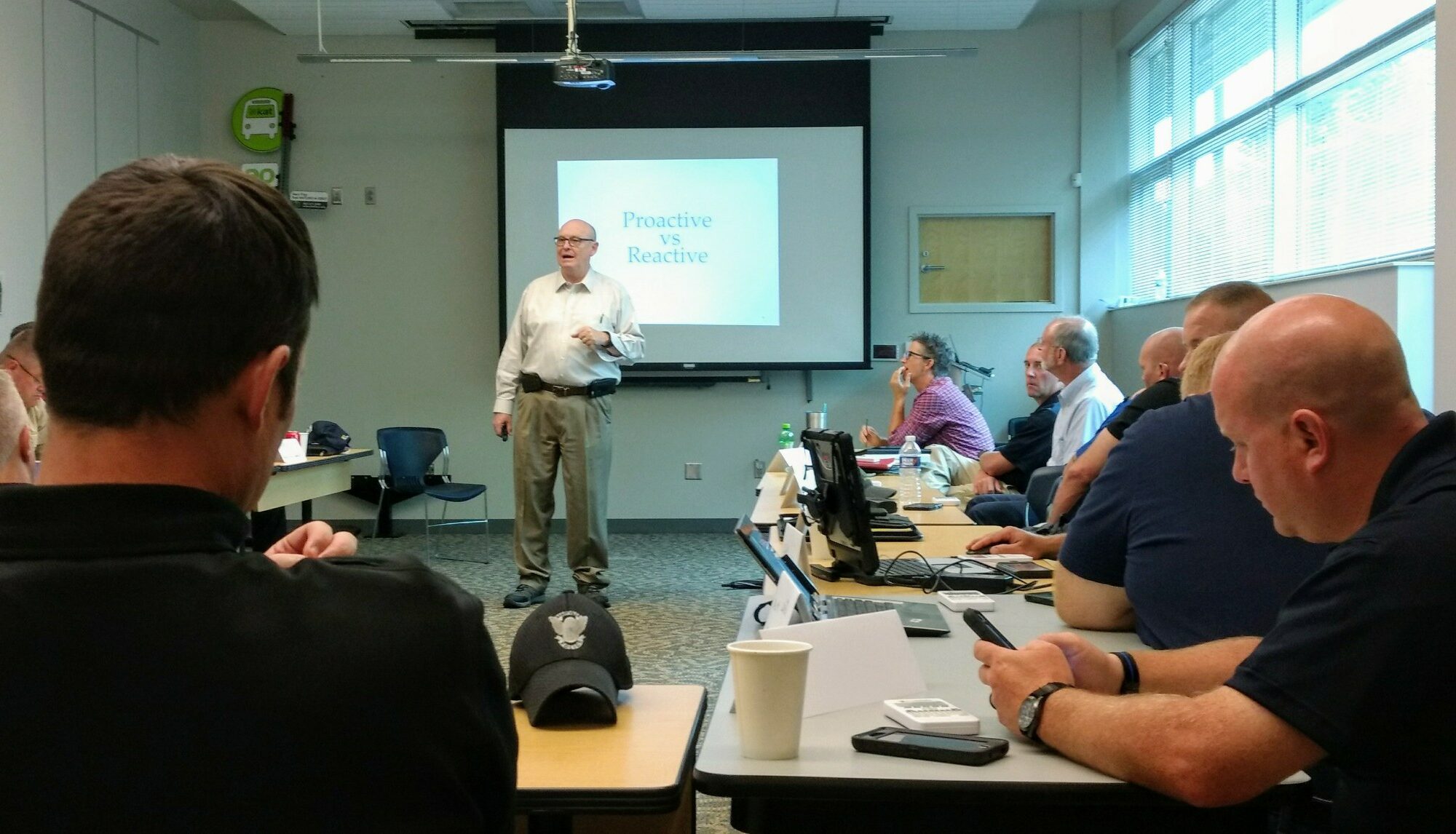 Eighteen officers from 12 different law enforcement agencies came together Aug. 27 and 28, 2019, in Knoxville to learn about road safety and engineering fundamentals. The training was organized by the Knoxville Regional TPO in coordination with the Federal Highway Administration and Bike Walk Tennessee. Its purpose was to give law enforcement officers tools to recognize and report road safety hazards, with the goal of preventing fatal and life-changing traffic crashes.

The trainer, Craig Allred, is a longtime Federal Highway Administration employee with a law enforcement background. Craig emphasized the need for law enforcement officers to speak up when they see unsafe road conditions that may be remedied by engineers or other experts.

Also attending the training were engineers from three local governments (Knoxville, Knox County and Oak Ridge), who expressed their interest in working more closely with law enforcement on safety issues.

Other organizations who had staff attend are Bike Walk Tennessee, the Federal Highway Administration, the Knox County Health Department, the TPO, and the University of Tennessee Center for Transportation Research.

The following law enforcement agencies sent officers to the training: 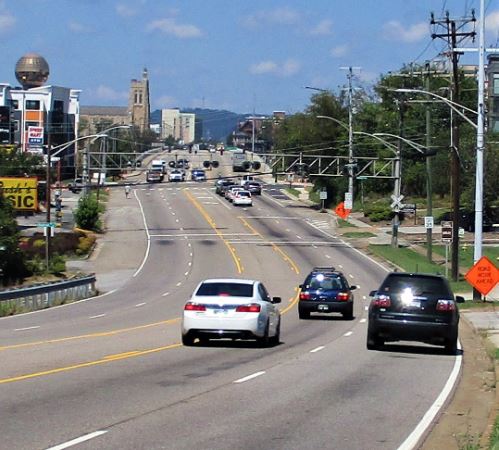 As a key commercial area and entry point into Knoxville and Knox County, the Chapman Highway corridor affects tens of thousands of people each day. The recently completed Chapman Highway Implementation Plan provides a prioritized list of projects intended to transform and improve the corridor.

A 40-page final report for the Chapman Highway Implementation Plan that summarizes the process and recommendations is available on the project page. The plan identifies and prioritizes projects that improve livability and safety for all modes of transportation along the corridor within the Knoxville city limits.

Intrigued by this work, the TPO wanted to know how Knoxville compares. Staff coordinated with the University of Tennessee – Knoxville to start the project through an undergraduate GIS class. More than 142,000 parking spots were identified after reviewing less than half of off-street parking in the city!

To complete this project, TPO hired Brennan Wilson as an intern to continue counting parking spots and analyze the final data. Brennan graduated from UT – Knoxville in May with a bachelor’s degree in geography. Working in the KGIS database, he is reviewing and counting parking areas and parking lots, developing methods to inventory on-street parking, and developing analyses such as parking per capita and parking per gross floor area on commercial parcels.

“I’m hopeful that my work can help make Knoxville a more environmentally conscious and efficient city while also exploring alternative travel methods,” Brennan said when asked about the project.

We’re looking forward to digging into his findings once the project is complete. We expect that the results will help guide future planning efforts and could eventually change the landscape of our city. 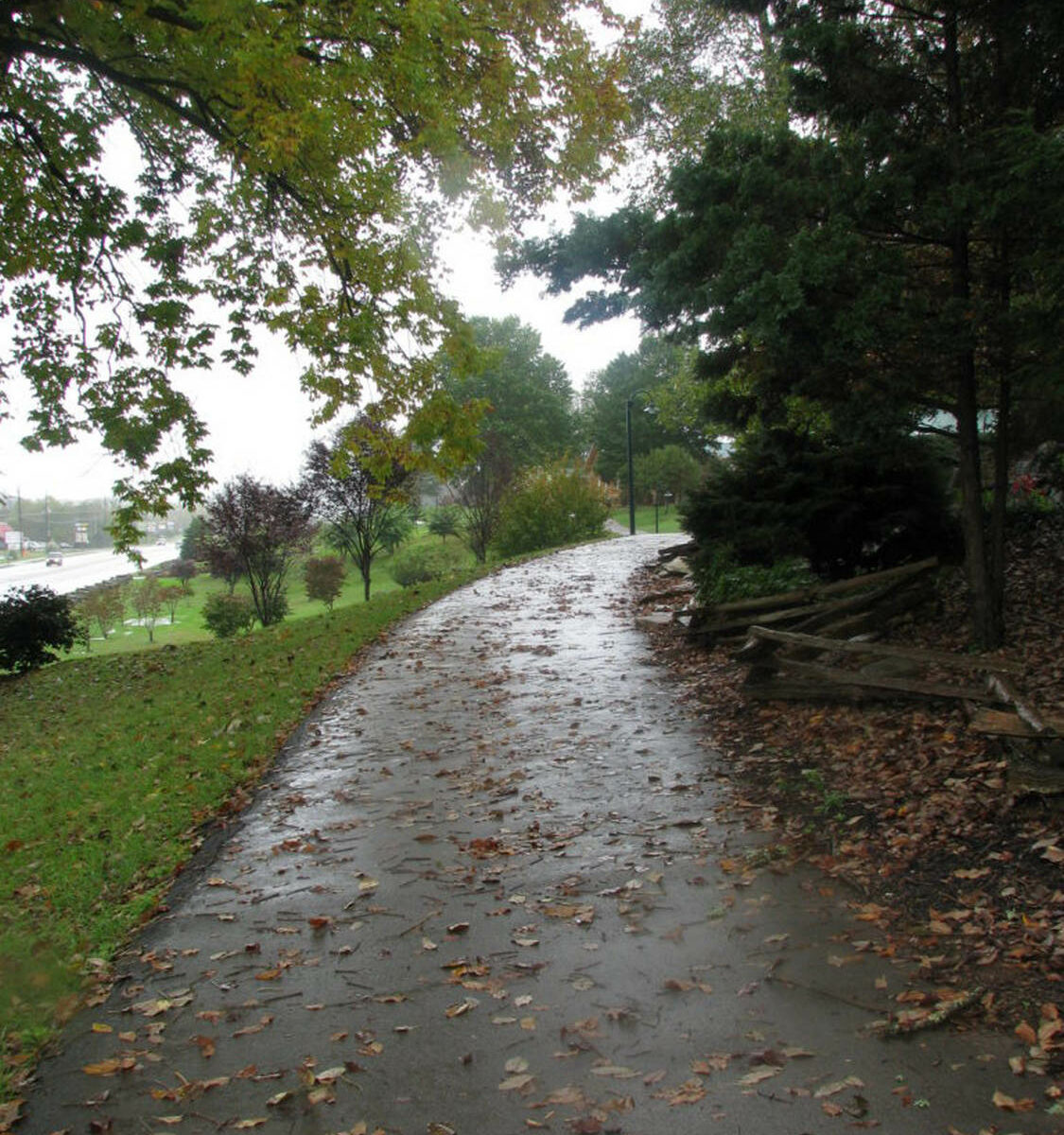